This picturesque track in Co.Kilkenny has developed into one of Ireland’s premier Racetracks. The track hosts 16 race meetings throughout the year featuring both National Hunt and Flat Race meetings.

The racing season at Gowran Park has quality fixtures spread evenly throughout the year starting with the Thyestes Handicap Chase in January.

February brings the Red Mills Trial which is often used as a prep run for Cheltenham.

In early March, the Tetratema Cup is a popular hunter chase event which shares the card with the highly valuable Shamrock Chase (Grade B Handicap for 5yo+). 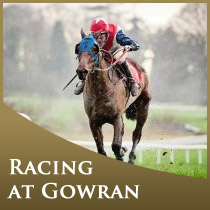 The flat season traditionally kicks off at Gowran Park with the Listed Victor McCalmont Memorial Stakes on the Sunday of the May Bank Holiday weekend.

The June and July fixtures also include some high-class jump and flat racing.