Hen parties doesn’t always involve people in the same circle.  The group could be made up of the bride’s childhood friends, colleagues, neighbors, and relatives who haven’t met each other until the hen night. 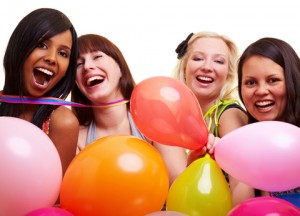 Things could be awkward, so an ice breaker game is one way to introduce the girls to each other.  One very common ice breaker used in hen parties is the name game. Yes, it’s been used a lot of times, but it never failed to bring everyone together.

Here’s you do the name game.  Guests can sit or stand in a circle facing each other.  The bride then starts by saying her name and an item she likes that has the same initial letter as her first name. For example, “Hello everyone, my name is Bianca and I like balloons.”  The person then next to her does the same thing, except that she repeats what the previous person said, so it goes “Hi, my name is Caitlin and I like cats. Her name is Bianca and she likes balloons.”

Easy peasy, eh? Wait until the seventh or tenth person speaks up as this is where the fun starts to get crazy.  Try using unusual words like “salopette”, “winklepickers”, “causeuse”, and “finnimbruns” and expect more giggles from the group!